This is Part 5 of the Blame the Victim Series.

The daily battle trauma survivors are engaged in is many times completely not understood by people who have not been traumatized.

The thing is, this lack of understanding makes total sense.

And it would be natural for that non-traumatized person to, by extension, assume that the actual traumatic events also resulted from similar mental defects, like negative thoughts and negative perceptions. Because it’s clear the person has WAY more mental defects and skewed and distorted ways of seeing reality than they do.

But this is far from the truth for trauma survivors.

For example, some women are groped, sexually coerced, sexually manipulated, and raped frequently for many years. And some people are yelled at and physically threatened on a weekly basis for years. There are children who are beat for their entire childhoods. And numerous combat veterans lived under threat of death for months at a time.

These people naturally will come to watch for “evil” in their environment and in the world as that is what they were subjected to, against their will. They will naturally be more “negative” and have more “negativity” in the way they think about the world.

There are four messages I’ve gotten a lot when I tell New Age /spiritual people that I write about PTSD.

1. You Create Your Own Reality.

You shouldn’t be writing or thinking about something so negative or else you will draw negative things into your life.

3. “Victim Consciousness” – believing yourself to be a victim – is Harmful.

You should not maintain victim consciousness.

It is bad for you to remain in the past. You should not dwell on the past.

But these don’t make a lot of sense.

1. Nobody Creates their Own Reality.

This is completely impossible because we are all interacting with each other.

People who desire power like to believe things like this, but we have limited power as we are all linked together within many systems, created by other people. We can’t, by the way we think, change everything that others do around us, and everything they create around us. We are a participant in a large interconnected ever-changing weaving of the intentions, motives, and acts of every human being on the planet at this time. This web creates many true, real limitations on us.

It is magical thinking to think we create our own reality. We can focus on certain goals within what is being created around us, and link with certain people. We can direct the focus of our minds. But we still must handle all real limitations and obstacles in these human systems as we go forward.

2. Trauma and Trauma Symptoms do not Result from Negative Thoughts

In terms of negative thoughts, just to clarify, the order of events for trauma survivors:

But there is no proof that this is the case. This is not logical.

And in fact, it could be deleterious to avoid negative thoughts because you erroneously believe they will cause something negative to happen.

3. Focusing on the Negative Could Help Healing.

After a trauma happens, it can spiral downwards into more and more trauma. The trauma-based reality can create a number of feedback loops and downward spirals that create more traumatic experiences. There are vulnerabilities and openings in the system, and physiological realities, that can lead to more trauma. These negative things that happen after trauma further reinforce a negative take on reality. From an outside observer’s point of view, it would seem like we are attracting negative events because of our negative take on reality. But all of this is not technically the fault of the trauma survivor. Technically, all of this negative stuff is the fault of the perpetrator, because it was the perpetrator’s acts that set the whole thing off in the beginning. If we try to look away from these feedback loops and downward spirals, and physiological difficulties, and internal negative states, and instead focus on love and light, we will make things worse because we will be in a state of denial and never heal them. So it’s very important to look at all the negative things going on internally and externally clearly and without any denial to begin the healing process.

Also, you may not be prepared to defend yourself from future trauma if you don’t focus to some degree on the negative things that happened to you.

In terms of thinking negative thoughts drawing negative things to oneself, the exact reverse is true. If I had been more skeptical and thought about negative potential consequences more, I may not have PTSD today.

Before the huge traumas, (I always had CPTSD but this is just for the life-threatening traumas resulting in PSTD), I was thinking positively, trusting doctors to be good people, thinking they want what’s best for me, that they are well trained, intelligent. All that was false. The truth was they were ignorant, not trustworthy, motivated by profit, not trained at all in what they were administering, and pretty stupid and careless. It would have done me a great service if I had had all those negative thoughts about what negative ways people can be and what negative things could happen. It would have prevented me from getting PTSD if I had done a huge amount of due diligence, based on being skeptical and the devil’s advocate for myself. If I had done that I may have had an entirely different life.

6. Victim Consciousness, or Awareness, is a Sign of Intelligence

I understand that “victim consciousness” is generally meant to mean a state of believing and feeling oneself to be at the effect of outside forces – a lack of internal locus of control, learned helplessness, shame, distorted self-concept, and false negative beliefs about self – which is not good. It’s better to feel internally like a creator of one’s life, to feel empowered and to have a healthy internal locus of control. But just because we want to go from victim to creator, that does not mean to blank out on the experience of having been victimized totally and put it into denial. It’s important to learn things from that experience. In fact, it is important to have “victim awareness” – the awareness of what led to becoming a victim – what in both the victim and perpetrator led up to the situation, and understand everything that can be done to prevent it in the future.

Basically we don’t want to throw the baby out with the bath water. It’s not good to feel and believe oneself to be a perpetual victim.  We do need to heal from the shame and distorted self-concepts, the negative beliefs, the impaired locus  of control and learned helplessness that can be part of victim consciousness. But focusing on the victim state enough to become conscious of all facets of the situation is good. We don’t want to lose any of the lessons and awareness about victimhood because of wanting to avoid facing it and the emotions that come up when facing it.

Yes, I was a victim but this does not infer that I am bad in any way; this is simply a fact of what happened. If I understand the facts thoroughly around how this came to pass, I will better be able to protect myself in the future from people with negative intentions.

And there are people with negative intentions everywhere; to ignore this fact is to be willfully ignorant.

Recognizing how you have been a victim = being smart and empowered.

Being aware of how you have been a victim and could be a victim again makes you better able to protect yourself.

Victim consciousness is a state of awareness not a state of weakness if you believe victims are strong and not at fault for their victimization. 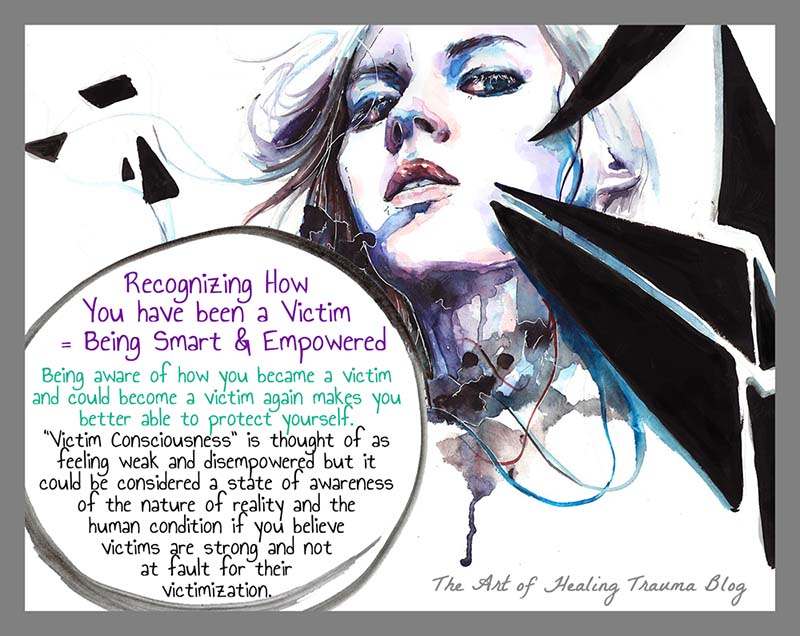 7. Dwelling on the Past is Not a Defect, it is a Necessary Part of Healing Trauma

And regarding the admonition around staying stuck in the past, the fact is, it’s important to honor your own timing.

It’s necessary to go into the past in order to heal it and then be able to go forth into the future in a more whole, intact, confident way.

Nobody has the right to tell another person when they should stop working with things in their past because this is a completely personal thing.