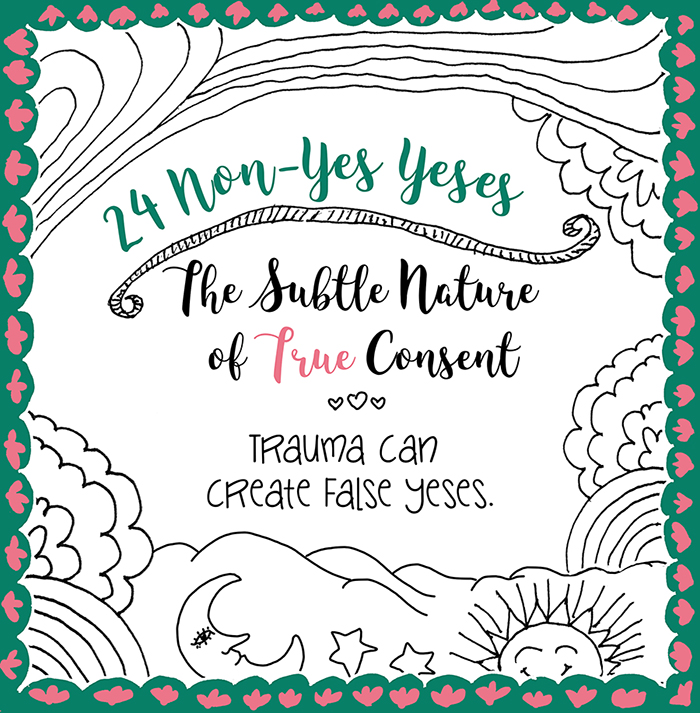 In this article I’m going to talk about issues surrounding saying yes when feeling no. Imagine that there is a perpetrator, a narcissist, who has perfected the art of manipulation, and a victim who has been broken in various ways by a long history of trauma and does not have the internal structure to say No. The narcissist will extract consent from the victim – but it won’t be true consent.

When this happened to me, I blamed myself for “giving consent” for years afterwards. One thing that helped me begin to understand who was truly to blame was examining all the subtle details of what happened rather than just looking at it in a simplified way. Feeling extremely reluctant, giving body language that reflects this extreme reluctance, and then finally, after being pressured for a very long time, giving in to the manipulation –  while there was technical consent given, it was not true consent. In this case, the narcissist didn’t respond to body language and other nonverbal information (was not engaged in a two way conversation that involved paying attention or listening) and used many techniques of manipulation to extract consent that was not freely given.

Don’t blame yourself for someone else not caring about your body language.

For people who have a tendency towards self-blame, blaming themselves – having a blame the victim mentality directed at themselves – is subtle. It sneaks around in the background. It kind of just sits there like a black cloud, draining the person’s energy and vitality. It’s part of their collection of habitually repressed emotions and thoughts.  Any repressed emotions related to victimization that have not been fully felt yet can be very subtly draining, causing a feeling of heaviness and tiredness.

Never taught to fight it. For people prone to self blame, these potent emotions remain repressed and out of sight because the person has been taught to accept that they are to blame much more than they realize they have been. Blame was placed on them as children, in moments they should have been loved unconditionally. This could have happened daily for many, many years. Then, blaming themselves harshly becomes a habit, an internalization of the strict or harsh parent. They simply don’t know how to confront and turn this around.

This blog post – Sexual Coercion – Is Sexual Abuse Lilly Hope Lucario points out that there are many different kinds of “Yeses.” She stated at the time that the only kind of Yes that is a true Yes (not leading to sexual coercion) is an Enthusiastic Yes. The analysis of what consent consists of has evolved since then and there are various models that have further refined and clarified various types of consent that exist. An enthusiastic yes is one type of true consent, but it is not the only one. There are many. For example, a model created by Emily Nagosky breaks consent into the categories of Enthusiastic Consent, Willing Consent, Unwilling Consent and Coerced Consent (read more about this here). And this blog post mentions that we could refine this even further by adding in categories such as  Cautious Consent, Reasoned Consent, Informed Consent, Secondary Enthusiasm (this is enthusiastic consent but it is based on wanting to see your partner experience pleasure, enjoyment or any other positive experience rather than on a desire for your own experience), Relationship Maintenance (this is a kind of consent freely given to make a contribution to maintaining the health of the overall relationship). Probably a model of consent will eventually be developed to have a dozen or so categories and numerous subcategories as different people contribute their ideas and experiences.

Before discussions of consent became common, back when I was in college and clueless for example, I had not been taught to differentiate different types of Yeses. I thought that any kind of Yes – an unspoken Yes, an implied Yes, an extracted Yes – is a Yes. I thought that all of them meant Yes. Obviously that’s false because of the fact that consent is so complicated.

Sometimes CPTSD and PTSD are the iceberg sitting underneath the False Yes. There is an iceberg of trauma sitting there in the body that is creating multiple layers of confusion, fear, paralysis, guilt, body memories, all swirling around, imprisoning the person’s authentic desire and true willpower. Because the “True No” has been imprisoned within this storm of trauma responses, the “False Yes” is what comes out at the tip of the iceberg. In fact, in many cases, the person was trained, during the trauma and abuse, to produce a False Yes when the True No is imprisoned. The automatic producing of the False Yes when feeling an Authentic No is, in fact, another enacting of a previous training they went through many times.

Of course, this False Yes will be interpreted to be a True Yes by someone who is hell bent on manipulating that person.

Unfortunately, a person who wants true consent can also be confused by a False Yes coming their way. It’s very complicated. But if both people notice that there is a problem with False Yeses coming out of one person, and decide to tackle this problem together, they can heal it. The partner of the one learning to speak their True No and True Yes can learn to carefully watch their partner’s body language, facial expression, muscle tension, tone of voice, etc. and to ask caringly about what is happening inside their body. Together, both will learn how to tell that something is going on underneath that is not a Yes, and take a moment to explore it.

Here is a list of False Yeses I compiled just to explore this phenomenon further:

None of the above is really true consent. The one that says “Self-hatred yes” I would say is actually “consent” in the sense that a person who self-harms is actually giving consent freely to initiate the harm to themselves by using another to harm them. I would say that most of the time this is not “true consent” because this person has lost the capacity to heal the distortions in their desires that arise from a trauma history which was originally imposed on them.  They believe they are giving consent to use the other person to self harm. Maybe they are truly giving consent and that is their right, but it’s very concerning and a sensitive partner might back up and ask to talk about it rather than go along with it. However, the partner may have no idea that is going on inside that person.

In the case that the person really is not giving much body language or much of an indication that they truly are not wanting to engage in this activity, then, while they aren’t giving true consent as they don’t have the ability to, you also can’t blame their partner for not knowing they are not giving true consent in that moment. But with enough time, and observation, the partner can learn when the body language is indicating that they are not desiring this, and with enough care, this can be worked through and healed together.

In the case of these Non-Yes Yeses, False Yeses, the person doing the violating of boundaries thinks they are Yeses. Some reasons why this may be the case:

Some of us tend to forget about all of those lacks in the other person and look only at the fact that we allowed it to happen. We look at how we gave in and don’t see all these parts of the other person.

Because of the “Yes” that wasn’t.

So – the reason I bring this up is because in order to get rid of the Internalized Blame the Victim Mentality it’s necessary to become much more aware of subtle nuances than we generally are. It’s necessary to go way beyond how we look at things on the surface. This kind of examination can potentially be somewhat painful and bring repressed emotions to the surface. Letting out all the emotions is a good thing, as long as it’s done slowly and while resourced.

The greater number of subtle parts we look at, the more aspects of the incident we can potentially find to move over from blaming ourselves to blaming the perpetrator. And this is an excellent thing to do, because it’s unhealthy to blame ourselves for bad things that are not our fault.

We tend to focus just on the act, but all of these other things are part of the experience. And – it leads to a whole list of things that get placed squarely on the perpetrator as their fault. That’s why it’s important to go deeper with it than just the appearance, the surface layer.

In order to get rid of the Internalized Blame the Victim Mentality it’s necessary to become much more aware of subtle nuances than we generally are.

The Entire Incident is Generally Not 100% the Perpetrator’s Fault, but the ACT is.

When willing to look at subtle factors and willing to embrace complexity, it’s possible to see how many factors from both parties contributed to the incident. Many times, the issues the victim has are unfortunate and create real vulnerabilities and openings to being victimized. But there is one person who made the decision and took the action. They are responsible for that act. For the entire incident, blame can be shared, though. There is a portion of blame the victim, therefore, that is actually accurate.

There is a portion of blame the victim that is actually accurate.

It’s good for victims to take responsibility for this percent they are responsible for. How they got into the incident and whatever issues and patterns led up to the experience. For example, the victim having an unconscious tendency towards self-destruction and self-sabotage would not cause someone to rape them, but that could create an opening or vulnerability that could allow the victim to, for example, go home with the perpetrator and then the the perpetrator could decide to take advantage of them more easily.

These things always need to be evaluated on a case by case basis. 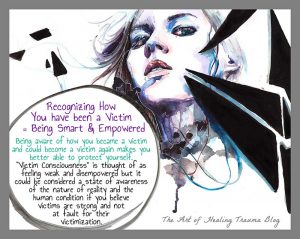