I attended a Writing from the Heart workshop with Aile Shebar on June 14, 2014. During the workshop, Aile Shebar gave us many writing tips. A number of tips were about what to do when facing a feeling of stagnation, overwhelm, or writer’s block with a writing project.

One tip was to write a haiku in order to take a break and allow the brain to play around with a totally different writing medium for a while. Upon returning to the main writing task, the brain many times will feel rested, refreshed and renewed. It may be more flexible and feel ready to keep going. And it may open the mind up to new ideas, solutions, and new ways of expression that can enhance and improve the writing.

During the course we broke into pairs and created haikus together. The one my partner and I created went like this:

Actually technically I don’t think that is a haiku, because haikus have three lines with 5-7-5 syllables (and that one is 7-5-7):

Many times, when I sit down at my desk to complete my book about healing PTSD, I experience writer’s block. I think it’s partly that the subject I’m writing about triggers me. Whatever the reason, I can easily become completely overwhelmed.

A couple months after the writing workshop I picked up my Writing Book and was flipping through my notes when I saw some haikus. So I decided to take a break from writing and create some haikus about PTSD. I have now been able to not only take a break from writing my book, but completely avoid it for months! Wonderful. Actually, I should get back to it soon. Anyway, I will be posting these 30 haikus in groups of 5 over the next week or two. These are the first haikus I have ever written – and I didn’t read anybody else’s haikus before writing them. Actually I think I will go read some now out of curiosity… 🙂

Note – I just looked at the Haiku Society of America’s website and the vast majority of haikus don’t follow the format! Wow, if I had known that, writing these haikus would have been way easier. Here’s an example of haiku contest winners and most have fewer syllables than 5-7-5, and some only have ONE LINE!  Oh well, now I know. I guess my haikus are some kind of purist-rigidly-adhering-to-the-format haikus. 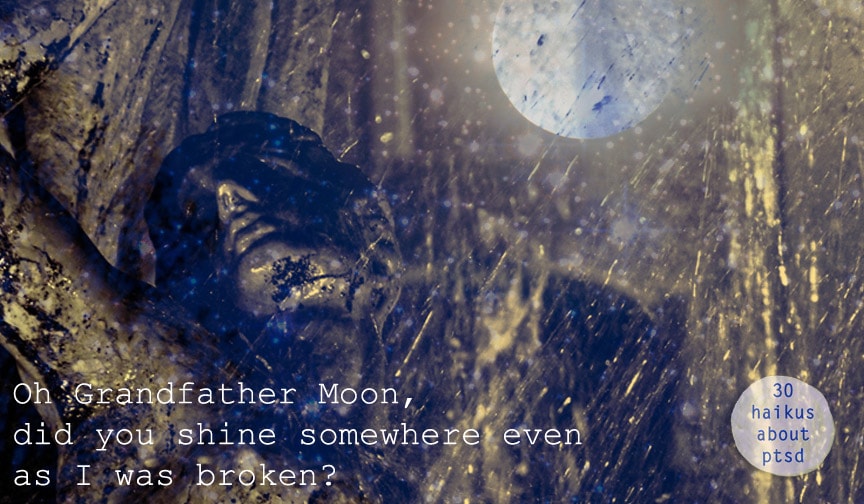 This first haiku is about the idea that even in the most extreme traumatic moment, somewhere in the universe there are resources, we just don’t have access to them. Grandfather Moon is kind of like a God, parent or benevolent being. “Grandfather” is fatherly and “moon” is usually considered motherly, so it captures both kinds of nurturing. It’s a sentiment that even from the deepest despair it’s possible to reach out for help.

Thank you to Pixabay user abudrian for the beautiful photo of the woman used in this haiku. (I contribute photography to Pixabay also; I think all artists deserve recognition for their work) 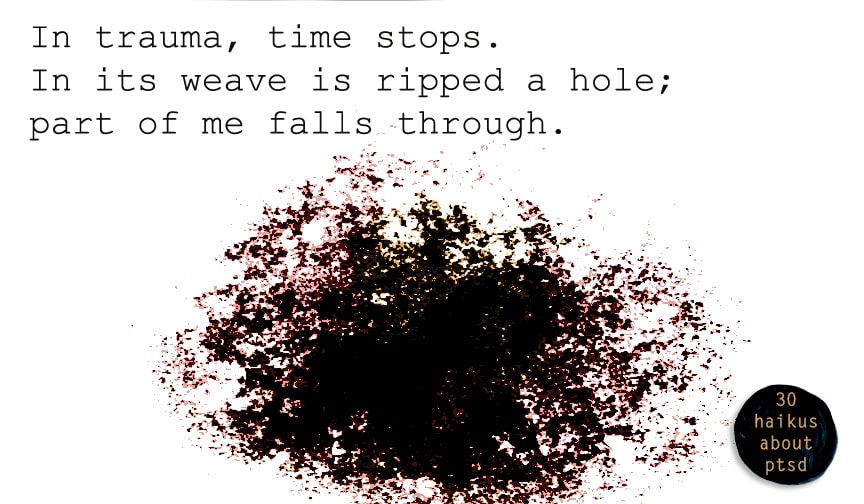 This haiku is about the sense that during a traumatic event, part of us is “lost.” There is a sense of time distortion. Time slows. Time can seem to stop. And one can feel like they can’t move on from that time – or parts of them can’t – therefore those parts are now gone. There are ways memories are encoded that add to this feeling. Thus, it feels like time opened and part of us became lost somewhere in the past. 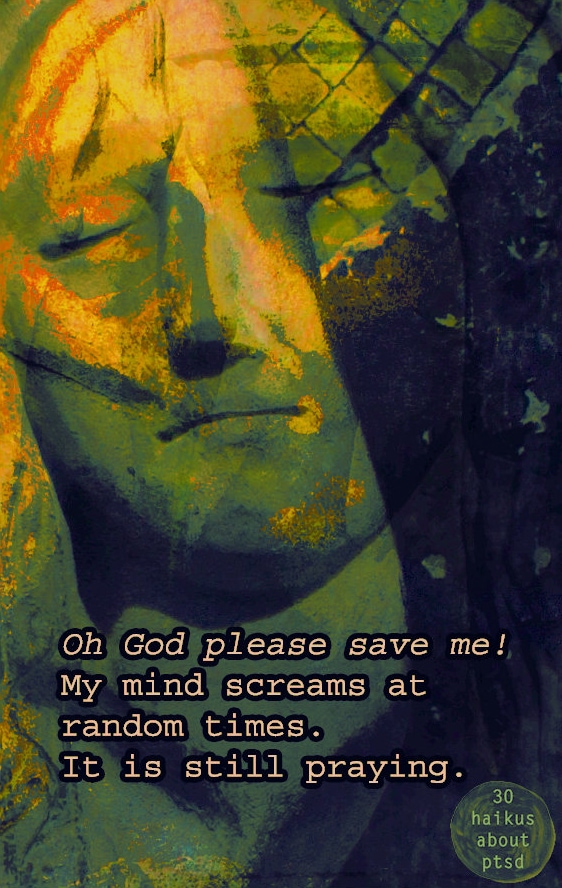 This haiku is just an experience that happens to me a lot. Just this morning, as I was waking up, my mind – totally independently on it’s own – screamed that very line: “Oh God, please save me!” Never mind that the traumatic events happened in 2007 and 2008, 7/8 years ago. It’s still praying. Really. And then I became aware of my surroundings, and realized it’s 2015, and that I was in a peaceful bedroom.

I was fighting for my life for a long time in both 2007 and 2008. Long enough for my mind to get stuck on that theme, that skipping record.

I even remember once a few months ago during the day, my mind thought that thought. I was just by the window looking out at the parking lot and light blue apartment buildings. That thought is always genuinely desperate, and it illustrates the kind of contrast people with PTSD can feel between their inner reality and the current reality around them.

I do believe that whenever my mind thinks that thought I am being triggered by something, but sometimes I don’t know exactly what it is at the time so it seems completely random. Now that I think of it, waking up is a trigger, and when I was by the window I was thinking about going to a medical related appointment,  which is also a trigger.

Thank you to Pixabay user WikiImages for the image used in this haiku. 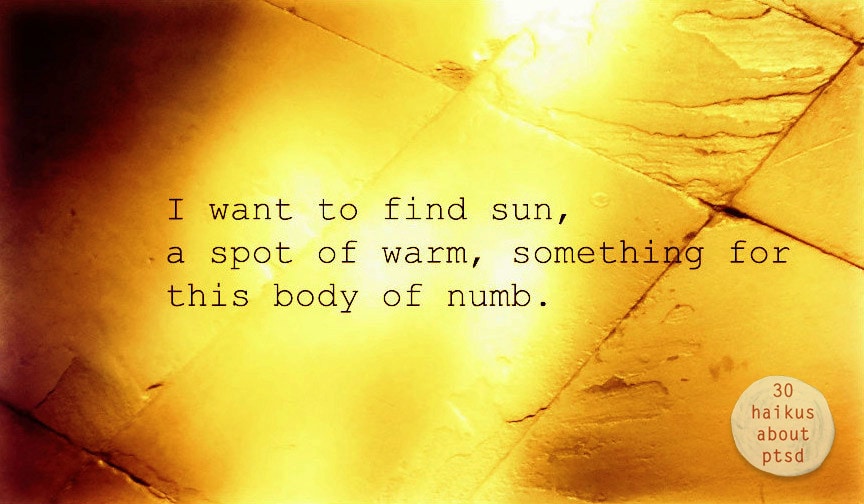 This haiku is about feeling totally, completely numbed out. It’s an expression of the desire to feel again. I want to feel something about life again, some sense of being alive.

Thank you to Pixabay user Jadid for the image used for this haiku. 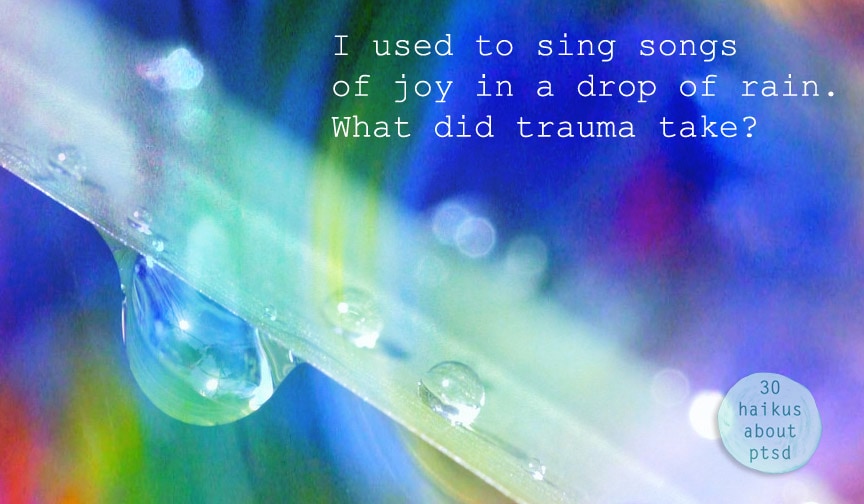 When I was just out of college, I composed songs all the time. One of the very first songs was something about enjoying the rain. All of the songs were so positive. One example:

And the night seems long
The end is never near
But when the sun comes up
It shines everywhere
And you can feel it
You are the sun
Shining in your heart
‘Till your walk is done.

In the case of childhood abuse, this innocence and wonder may get smashed so early a person won’t even have clear memories of when they felt that way. I had trauma in childhood – enough to pave the way for PTSD – but it wasn’t so extreme as to completely kill my sense of my own innocence and wonder. That came later.

Thank you to Pixabay user cocoparisienne for the image of the rain on the blade of grass.

Thank you for reading, and best of luck on your healing journey. Tune in next time for 30 Haikus About PTSD (Haikus 6-10). 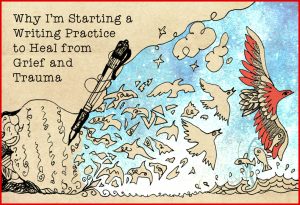 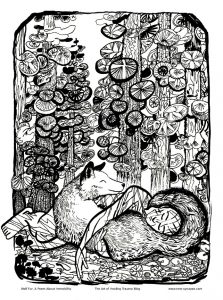 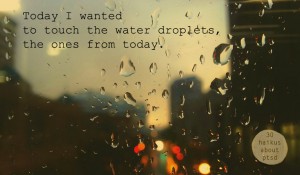 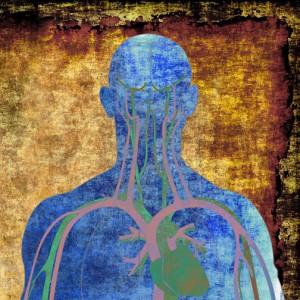