Here are some visual symbols that came up for me as a result of my second session of Rapid Resolution Therapy.

Some Terms related to generating images of inner states:

I saw a symbol of a flame with three points. This represents being free of energetic, emotional and physical charge, being more alive, being more available to life, having more mental clarity, being able to make decisions based on the present moment and not the past, and being more my true self.

This is the flame as well as some other images of being in the session.

For part of the session we focused attention (mindfulness) on the breath and sound as a way to support integration and being present.

Right after the session, an image came to me of a computer disk that has been cleaned about 90%. You know when you initiate Disk Cleaning for your computer hard drive? At first the image of the memory of the hard drive shows it has many small bits of color, and after the cleaning is done, all the colors are separated into distinct large blocks. This session was like having the hard drive of my brain go through disk cleaning.

Even so – it reverted over the next couple weeks:

Kind of like my computer – the disk will need cleaning again at some point in time because the memory is constantly being accessed and written to and it reverts to its disorganized state.

When I came home I drew this image of having a bit more clarity of perception, but having it only temporarily

10. Visual Representation / Symbol of Changing My Relationship with a Memory – Black Unicorn Breaking through a Wall

I also saw an image of a black unicorn breaking out of a reddish brown stone wall. This symbolized the memories being broken out of where they had been stored.

Some time after the session I was inspired to create this image as a reminder to always balance and integrate all parts of myself, the body (including energy), emotions and mind (including spirit). 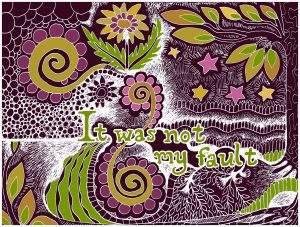 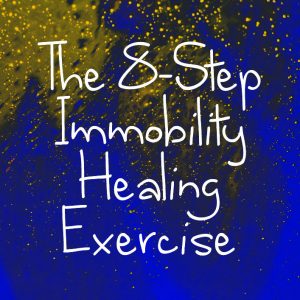 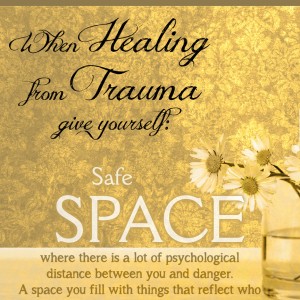 Trauma Recovery – Four Things to Fiercely Give Yourself (Space, Time, Silence and Self-Expression)